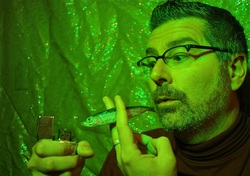 Dorian Mode M.A. (Hons) is the author of the comic novel, A Café in Venice, Penguin Books (Random House in Europe) and his comic memoir, The Mozart Maulers, also published by Penguin.

He has penned several short stories that have featured in bestselling Penguin anthologies such as Girls Big Night Out 3 and Heatwave, Penguin Summer Stories.

He was a guest speaker at the Sydney Writer’s Festival and read an abridged version of his second novel on ABC’s Radio National (since repeated). His first novel was also released internationally as an audio book. In 2006 he was awarded a Varuna Literary Writing Fellowship and lectured in creative writing at Newcastle Uni.

He writes features for The Age and Sydney Morning Herald and was a weekend columnist for the Daily Telegraph under the pseudonym Beachcomber – a sitcom based on the column was optioned and made into a television pilot. He penned the back page column for Storyline, The Australian Writer’s Guild Magazine and was also the back page columnist for Modern Fishing Magazine – the best selling fishing magazine in Australia. He is currently a regular travel feature writer for NRMA’s Open Road Magazine.

His first play was produced in Sydney in 2011 with excellent reviews.

He has completed his doctorate in 2012 (APA scholarship) and lives on the NSW Central Coast with his wife and two children. He enjoys his local fishing club, pubs and playing snooker with anyone born between 24th of July and 23rd of August.